This Audax was on my list of things to do as Geoff really wanted to do it last year but for some reason, we were unable to do it, I expect I was running or something !!  Anyway, I was determined we would do it this year even though Geoff seems to have lost a little bit of his love for cycling !!

The Travelodge at Alfreton was booked for 2 nights to make it all a bit easier, and as we traveled down I was excited about doing our 2nd 300km event even if Geoff wasn’t.

We set our alarm for 4.30am and had our egg sandwiches ready for breakfast, I still find it far too difficult to eat this early in the morning but managed half my sandwich before we set off for registration at Alfreton house, taking a banana with me to eat before we started the ride at 6am 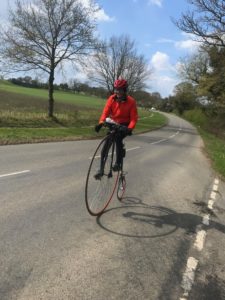 We soon realized it was very cold much colder than we had anticipated, in fact, according to the BBC it had been the coldest April night for 6 years! By the time we reached the first control point in Newark, I was actually wondering if I was going to be able to carry on but after a bowl of the best porridge and honey I have ever tasted I was ready to face the cold again.

Next control point was at Woodhall Spa and for a short while we rode with a small group from Derby Clarion, the time goes much quicker when you have someone to chat with, they had great riding skills too, taking it turns on the front,unfortunately after a while we lost them going up a hill.

Next control was at Skegness, rumor had it that we would lose the headwind here which would be a relief ,it was on our way to Skegness that we met the amazing Richard Thoday , riding the 300km on a Penny Farthing, we arrived at Poppies Cafe together and spent time warming up over a bowl of soup and hearing about Richards record-breaking challenge in July, riding end to end on his Penny Farthing hoping to break the world record set in 1886.

We left poppies heading for the information control at Sutton on Sea, looking forward to the tailwind, first we had to stop and get a photo by the welcome to Skegness sign, then it was on via chapel St Leonard’s spotting the Butlins big top tent on our way,but no sign of the sea! Our route instructions said to write down the information found at the public toilets.

In Horncastle, I thought Geoff would stop for our receipt at the local Garage especially when I saw other riders there but he sailed passed and we stopped for a warm-up in Costa coffee, I didn’t find the soup very filling at lunchtime so I took the opportunity and had a very enjoyable Sausage bap.

Only 35km to Lincoln and lovely to see the cathedral on the horizon, in fact, this stretch was the best bit weather-wise, here we stopped at the local Coop for our receipt, added lights and another layer as the temperature was beginning to drop again. 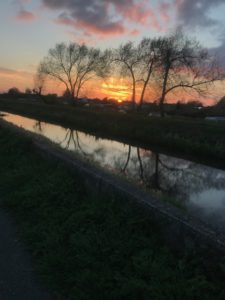 Next stop would be Alfreton, the longest stretch at 65km, all rode in the dark, I actually enjoyed this night riding, the roads were big and wide never feeling truly dark, the sky had a glow to it, unlike in the countryside when darkness is truly pitch black! Feeling cold we stopped off at the Mac Donald’s in Ollerton for a hot drink, shortly after leaving here we bumped into Richard again on his Penny Farthing so we continued down the cycle path next to the A38 together, I enjoyed watching him maneuver the Penny Farthing along the bridge over the M1

At midnight we rolled back into Alfreton house 18 hours after we left.

While getting our Brevet Card checked and enjoying yet another cup of tea we discovered, 2 things our route sheet was an old one we had downloaded from the internet, for some reason we had not received the up to date information through the post. So no information was needed from Sutton on Sea and the first man back finished 6 hours before us and had been in the pub all evening!

While I would like to do a Summer 300 I am not sure I will be able to persuade Geoff so it’s back to 200 km for the next 5 months!