At last a calendar event, an opportunity to meet up with like minded people and soak in all the amazing Audax stories!

We arrived in Great Dunmow with plenty of time to get our Brevet Card and have a coffee, it wasn’t long before we were seeing familiar faces and chatting with other riders we knew from Cambridge. The talk was mainly about the wind and how it would blow us out to Snetterton then would be head-on from Snetterton to Newmarket before easing up again for the last leg home! 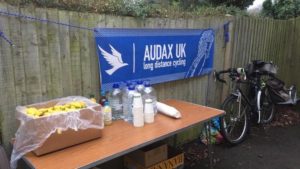 At 7.30 am we all gathered outside ready to go, I love the way complete strangers chat away to you like they know you, Audax riding is so friendly, after the first few kms, the group starts to spread out as we settle into our own riding pace.

Our aim was to try and get to the halfway point at Snetterton without a cafe stop, and with the tailwind, we were flying along, as we came into Lavenham the church looked very grand and always makes me think wow! By 9:20 nick was stamping our brevet card, after eating a hot cross bun I had in my pocket we set off for Snetterton.

Due to the tailwind, we made good time to Snetterton, arriving at 11.40, making it a very enjoyable ride but as we turned into Snetterton circuit we got a taste of what was to come. At Tyrell’s Restaurant, the service was quick and efficient, as we ate, we thought about the howling wind outside and watched as other riders set off into the wind.

40 mins later we ventured out into the wind, the wind so strong we could barely stand up straight. As we set off I thought once we get out of Snetterton and back onto the roads it would ease up but I was wrong! The strong head/ side winds continued all the way to Newmarket and were the most ferocious winds I have ever experienced, I learnt quickly to observe my surrounding look for gaps in the hedges and keep the bike in a low gear, it was mentally exhausting and at times out my comfort zone! 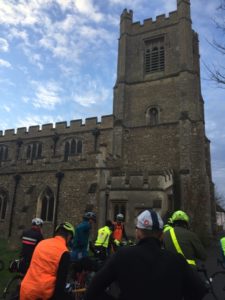 Just over 3 hours later we made it to Newmarket, by this time I was dreaming about a cafe stop out of the wind, so my heart sank a little as Geoff turned into the BP garage, but we soon had food and a receipt for our Brevet Card. We also found other riders here too, including Nigel and our quick stop turned into a 30 min stop as we chatted away.

As we set off again we realised much to our delight that the wind had dropped and we had less than 50 km to do, after spending most of the ride on our own it was nice to see other riders too and the time passed quickly as we played leapfrog along the way, getting a blast of Nigel’s music every now and again also lifted my spirits.

Before long it was dark and I got the chance to try my new Volt 800 light out, I had bought it as an extra light to use with my volt 400, mounting it on my handlebars so I could turn it on and off as needed, it worked really well and I felt much more confident riding in the dark, the roads were reasonably good so our speed did not slow down due to the darkness.

Finally at 18.40 we pulled back into the St. Mary’s Centre at Great Dunmow, to be greeted with soup, rolls and tea, as usual, I felt quite “high” from such an achievement and enjoyed the banter with fellow riders, while discussing the ride, we discovered that a few others had actually been blown off their bikes by the gusts of wind, but thankfully no damage had been done.