Where the months disappear too I just don’t know but somehow it was March and time for the Cambridge Half Marathon.

After recovering from my biking injury that had prevented me from running for most of last year I was looking forward to doing some running training ready for the Cambridge half, what I didn’t allow for was the continued menopausal hell ! and the fact that biking was the only thing for many months that made me truly happy !

After the Freethorpe 10 I really struggled with my running, everything became a chore, apart from riding my bike,then I decided enough was enough I wanted my life back so I gave in went Doctors and started HRT, suddenly I had my life back,I was sleeping through the night,I stopped hating everybody,(well almost everybody ?) but most importantly I regained my bounce, the zest for life and my confidence. 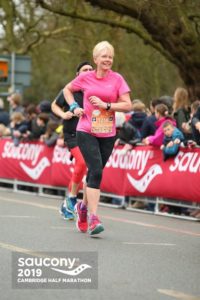 With only 4 weeks till the half marathon there was not much time for training but with a few 8 milers and a 12-mile slow jog along the coast, I went from thinking I would never do it, to thinking if I could bike 120 miles then I could run 13.

On the morning of the half marathon, Gina and Richard met me at Geoff’s and we wandered down to Midsummer Common hoping to find many of our friends who would be running, as like past years the atmosphere was amazing and it wasn’t long before the excitement started to build.

As I had no idea how my run would go I decided to run on my own, well as much as you can be on your own when surrounded by 10,000 other runners, just one reason why I love this event so much.

Before long we were all gathered into the starting pens, easier to keep warm this year as we had all been encouraged to wear an unwanted top that could be discarded as you set off, all items would then be collected and donated to the homeless. 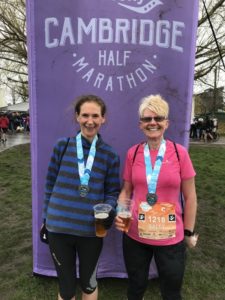 Reunited with my glasses

The weather was cold with some drizzle, perfect running conditions, for some silly reason I made the decision to run without my glasses something I never do and it annoyed me the whole way round, I can see well enough without them but it just didn’t feel right and for this reason I just don’t like any of the free event photos as I just don’t look like me !

My favourite run at home is an 8 mile route which I run quite often,so the first 8 miles was easy enough, as expected the support from around the route was amazing, even nicer when it’s from someone you actually know, the water and gel stations were well manned and easy to get too, nice to see everyone aiming to get the used bottles into the bins, with the promise of them going for recycling.

Around the 10 mile mark I noticed the 2.15 pacers, I decided I would try and keep with them, by mile 12 I was struggling a little but was just in front of the pacers, then a call out from Geoff spurred me on,then,down the final straight a call out from someone else I knew made me stride out for the finish line,which I crossed with a time of 2.14, at this point one of the pacers tapped me on the Shoulder and told me he had followed my calf’s for a few miles and what fine calf’s I had, later I thought I should of told him they were cyclist calf’s.

I received my medal from one of my fellow Ladybirds which made the whole day just perfect.