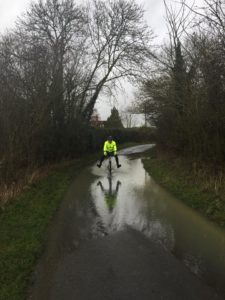 Its been a disappointing December for bike mileage due to the bad weather and Icy conditions but today to end the year perfectly we clocked up a good 70 miles on the bike, many of the roads were flooded after the heavy rain but luckily no ice today.

Although that has been the only disappointment this year, everything else has gone to plan and I have enjoyed many happy adventures with my friends and Geoff.

The highlights had to be The Lap Of Anglia and cycling from my house to Edinburgh with Geoff,as well as running two fab half marathons.

2018 is promising to be just as exciting with many events already booked up, in fact, my diary seems busy right up until August which is rather exciting.

Finally it was here,16th August,

A day I have been waiting for all year, the start of the Lap of Anglia I was nervous and excited all at the same time, and still wondered if I could actually manage to ride over 400 miles in 4 days.

The meeting point was at the QEH, packing the van, greeting everyone and sorting last minute problems did not take long so just after 8 am 45 riders gathered on the helipad, a few photos were taken and then a peloton of Red jerseys set off on a 4-day adventure.

First stop of the day was just down the road at Sandringham for another photo shoot and to gather ourselves together after the great send off, we then split down into smaller riding groups making it easier and safer on the roads.

We continued along the coast stopping at Holkham, Sheringham, and Walcot, where they served the most delicious Salted Caramel Ice cream before ending the day In Norwich after riding 97 miles. 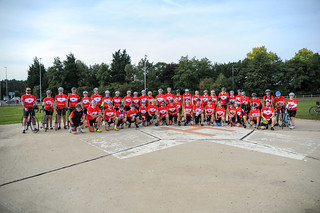 The Holiday Inn provided great accommodation even allowing us to take our bikes to our rooms, where some I believe even washed their bikes in the shower, tut, tut !!!!

After a fabulous breakfast, and a few laughs and jokes with fellow riders we set off in the rain for another day of riding, sticking close to the coast, we called in at Wroxham, Great Yarmouth, Leiston, Melford, and finished in Ipswich after 109 miles. luckily by the time, we arrived in Great Yarmouth the rain had stopped and the sun came out to help us on our way.

You never had to think about how many miles you were covering in a day, as each stretch was never longer than 29 miles, then the magic support van would always appear and you could mingle and chat with the other riders as well as refuel before setting off on your travels again.

The third day was the day I was most looking forward to and dreading at the same time, riding mainly in the flatlands I wasn’t sure how I would cope with the climbing but this was my chance to find out. Same routine, stopping every 20/25 miles calling in at Acton, Ridgewell, Saffron Waldron, Letchworth and finishing at Luton after 99 miles. A total of 5.190 feet of climbing and I was happy, even the few rain showers didn’t bother me some people mentioned the wind but, to be honest, I hardly noticed it as my mind was on the hills 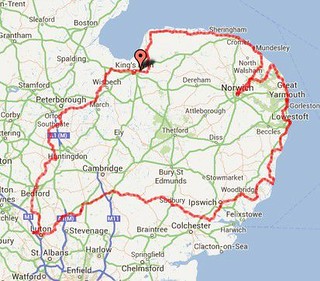 Far too quickly it was the fourth and final day, I really did not want this adventure to end, it was going to be the longest day with 110 miles to cover but after the hilly start, we would hit the flatlands with a tail wind. We called in at Flitwick, where Tesco supplied us with Bananas, then Catworth and Stanground by then you could feel the excitement rising as we realized that we were going to make it !! Geoff surprised us with a visit too, catching us eating and drinking at the Woolpack pub. Next stop was at Parson Drove, where a children’s karaoke party was in full swing. Then we all gathered at the bank house in Kings Lynn for the victory ride back to the QEH.

Damien led us the last mile down the bypass back to QEH it was amazing, 45 riders all in Red Jerseys one after the other like a long train, the atmosphere was electric, then over the roundabout you could hear all the family and friends shouting, clapping and cheering us, a totally fabulous ending to a totally fabulous event.

I feel very proud to have been a part of such a fabulous well-organized event, I met some awesome people,had some great laughs and realized I can achieve more than I think I can and the answer to the question most people want to know is…. No, I wasn’t too sore or tired, in fact, I went out with SWNC the following day on the 100-mile ride to Cromer.

It has has been a dream of mine for a long time to go on a multi day bike journey, I am very lucky to get to do all the fabulous things I do but I have envied my friends and Geoff when they go off on their biking adventures.

BUT Tomorrow I start my own bike adventure with a very special bike journey, The Lap of Anglia.

A 4-day journey that will take me and 40 other riders from Kings Lynn to Norwich, Norwich to Ipswich, Ipswich to Luton then Luton back to Kings Lynn, a total of 400 miles.

You may wonder why I would want to do such high mileage over 4 days but its all in aid of the East Anglican Air Ambulance, such a fantastic service that relies on donations to continue to survive.

This ride is not a race or a sportive, it’s not about getting from A to B as fast as possible, it’s about making people aware of the great work the Air Ambulance does and how it’s funded by donations, something I did not realise.

Hopefully the three 200km Audax rides that I have done, and dragged Geoff along too, have taught me how to pace myself better on long rides, how to fuel myself better and how important it is to take a little stop every 20/25 miles or so, by doing this I have never finished a 200km Audax feeling tired or worn out.

This will be a tough challenge for us all, but most of all it will be fun, meeting new people, making new friends, having a laugh although I expect there will be a few sore bits too !!!

You never know when you, a family member or a friend may need the help of the Air Ambulance……….and if you see us on our Journey be sure to give us a wave of encouragement.