In 2016 we rode the 100 miles of Suffolk Lanes Audax and enjoyed it so much we thought we would do the 200km as part of my RRTY, the weather forecast was for thundery showers but this was not going to put us off.

Not quite such an early start which is always good for me when riding on a Saturday but as we arrived in Bildeston at 8 am we were greeted by a heavy shower of rain, luckily it had blown over by the time we started at 8.30.

I reminded Geoff about how he hates starting off at the front and how its best to let the faster guys go tearing off first, a mistake we made on our last Audax, so we hung back for a few minutes then had a good start alongside Fixie Mick Ady and Jayden all from my TTT rides and Simon from Cambridge CTC. 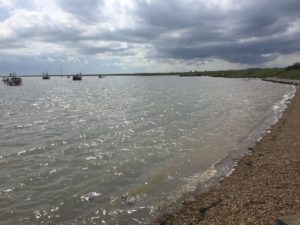 For us, it was a very fast start as Geoff was determined to keep up with Fixie mick, at one point I almost lost them. We stopped at traffic lights and while I was helping Simon out the lights changed and the others were off like a bullet while I got caught by the lights again, then I had the dilemma of should I try and catch them or hang back with Simon, in the end, I decided to try and catch them. Just when I thought I would never catch them I found Geoff waiting at a junction for me and before long we were back in the group. Making it to Halesworth and the first coffee shop with an avg speed of 16mph.

Everything was going smoothly, in fact, I was very impressed with Geoff he certainly rides his Fixie much better than his geared bike! Then just before we reached Orford, I got a puncture, which meant we lost our little group as I told them to go on because we could hear the thunder in the distance. It took 2 attempts to mend the puncture as we discovered one of the new inner tubes had a split near the valve, by this time the thundery shower had blown over and we realized we would never catch the others up.

Shortly after getting our card stamped at Orford Geoff got his first puncture followed quickly by 2 more, luckily Simon who is an expert on puncture repair helped us out, combined with the help of a car driver who happened to have a track pump in his car !! We never did find the problem, although it could have been the cheap inner tubes, anyway, it was solved by using a liner in the tyre where it kept puncturing.

After all this Geoff had lost some of his enthusiasm but once we reached Framlingham and re-fueled we continued on our way with Simon, finishing the ride with no more dramas !!!

Interestingly it was the highest avg speed for Geoff on a 200km so he definitely does better on his fixie, due to the faster pace I only took one photo, at Orford, the rural route was  beautiful especially Orford Castle which is the only castle I saw out of the 3 we were meant to pass on the route !!!

This Audax was number 10 out of 12 for my Audax RRTY, next month it will be the Mildenhall 200km ….. after I have done the Lap of Anglia.