Its all official and legal,my son is finally on the road.
When I bought my new car back in sept 2008, my son was about to take his driving test.

So I decided to keep my old car for him.

Never thinking for one moment that it would be another year before he actually passed.
I did begin to wonder if I had made a mistake by keeping my old car but its worked out really well.
A part from the obvious reasons for wanting to pass his test , work had also offered him a promotion and a full time job if he passed his test.
So its celebrations all round and I get my beloved bike back too , though after a year of commuting its not quite the same 🙁 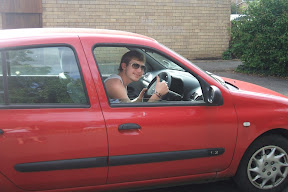