At last, the 200km Audax that would complete my RRTY and in what promised to be the best weather conditions you could wish for.

Geoff stayed over at my house as it was easier to get to Carbrooke from mine when the alarm went off at 5 am my first thought was no more early starts in the cold winter months ahead. We arrived at the start in plenty of time, which was a good job as Geoff had a problem with his iPhone/Wahoo mounting on his bike, thankfully he soon had it sorted and we set off with the other riders at 7.30 am. 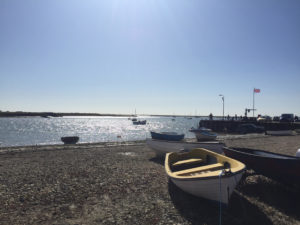 The rising sun was a bit annoying as it was straight into our faces but I soon had a much bigger problem, for some reason my Garmin lost the route and as usual Geoff who always likes a fast start was off like a rocket, fiddling with my Garmin and trying to keep up was just too much and I soon lost sight of Geoff and the Group he was tucked behind.

When I reached a junction and had no idea which way to go I decided I had better phone Geoff, just as I was explaining that I had lost my route 2 guys came by  I asked Geoff to wait and I would follow on behind. A few mins later we were reunited and I thought I would reload the route at Diss. Geoff continued to ride like a bat out of hell and I soon lost him again and for a few mins I actually thought about turning around and finding my way back to Carbrooke , then the same guy as before came by me and I just decided to follow him although a while later I had a quick panic when I suddenly thought he might not even be doing the audax, anyway after a brief chat and me explaining my situation he was happy for me to follow him to to the first stop in Diss, where I found Geoff happily eating a cheese scone and drinking his milkshake !!!

Geoff seemed to be in such a hurry that I barely had time to eat my scone and certainly no time to reload my route or even finish my cup of tea …..by this time I had found my cycling legs,it always takes me a while and we made our way to Orford in the lovely sunshine, with it being such a lovely day the cafe was busy but it was nice to sit and enjoy the scenery and have a chat with a couple of the other riders including the Guy from Stamford that had saved my RRTY. 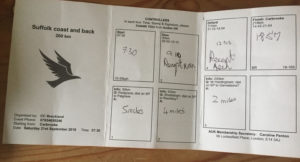 From Orford, it was 90km to the next info point, we stopped 3 times on the way, at Snape, Harleston, and Wymondham so Geoff could get drinks, The pub at Harleston was especially nice, in fact, the whole route was very scenic, with lots of lovely Churches along the way I was disappointed that I didn’t stop and take more photos especially of the setting sun but as my Garmin never re-found the route I was very wary about letting people out of my sight.

I loved the last 16km from the info control, I may start off my rides steady but I always finish strong, I enjoyed chatting to the 2 guys who Geoff had been chasing at the start, seems they are 6 months(I think) into there RRTY and always enjoy riding together for company.

Anyway, all ended well and in case you are a Garmin hater, my problem was user error, in my panic to re-load route while cycling and trying to keep others in sight I loaded the wrong route !!!!