I have wanted to do a night ride for some time now and I always thought we would do the Dunwich Dynamo, then Geoff discovered the Solstice Sunride, the logistics of this ride made it very appealing, you start in Cambridge at any time you want with the aim of getting to Lowestoft for the 4.30am Sunrise. The only cost is for transport for you and your bike back to Cambridge. 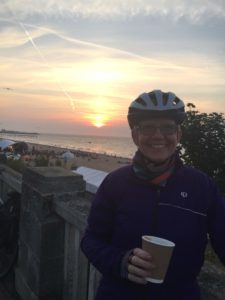 The plan was to get up on Saturday do Cambridge Parkrun, potter about for a few hours, then aim to start the ride around 6.30pm, after a late afternoon snooze, needless to say, the afternoon snooze did not happen, I put it down to excitement !!!

We started the ride with 2 fellow lappers, Julie and Darren and had a most enjoyable ride out to Mildenhall with them, passing 2 more lappers  Stephaine and Brian, on the way, it’s amazing how you recognize people by their riding style. Julie and Darren then went off to visit family while we carried on to East Harling and the halfway stop.

As we had made such good time to Harling social club, we stayed for longer than we usually would, but by 11 pm was eager to be on our way, so after adding a few more layers of clothing, and checking our lights we made our way out into the night.

We expected to be much slower on the second half of the ride, but our eyes soon became accustomed to the dark, by this time the roads were quite empty, so it was an awesome experience to be riding at night on roads just perfect for night riding, with Matt Darey blasting out from Geoff’s Bluetooth speaker.

After a while, we passed by someone at the side of the road putting on a jacket, as we sped past I thought I know that man !! Shortly after Aphid, another lapper caught us up at a junction, the 3 of us continued the ride together, by now we were well ahead of schedule again so we made our way to the 24hr Mcdonalds at Gillingham arriving at 1.25 am. 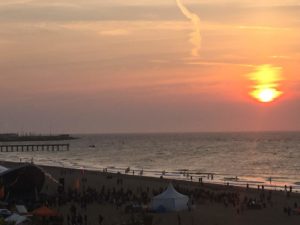 After a hot drink and chips, we continued on our way 45 mins later with just 10 miles to go. Usually, when you arrive somewhere at 3.15am you would expect the place to be deserted but due to Lowestoft having its new 24-hour First light festival it felt quite amazing to be pedaling down to the pier dodging tons of people.

We spent the next hour hanging around waiting for others to arrive then we enjoyed a bacon roll and coffee while we watched a beautiful sunrise before catching the transport back to Cambridge, wishing we were riding back !!!

Totally awesome ride with a route perfect for night riding but neither was prepared for just how cold it gets during the night on the East coast with an N/E wind…….