As many people will know I love Audax riding, especially long Audax rides, I read all the write-ups about the various rides and admire the riders who do the super long rides which involve night riding, I often wonder just how far I could ride !!

Just recently I have started to ride with the Cambridge CTC, rides which I really enjoy, many of these riders are experienced Audaxers so I enjoy their company the stories they have to tell and soak up all the advice they give about long distance riding.

Nigel and Yasmin were planning to ride the Four min mile audax and while Geoff was out on a ride we were invited to join them, when he mentioned it to me I grabbed at the opportunity especially as I know no other women that like to ride long distance.

After the initial excitement wore off I realized it would be a hilly ride, as we went over the Chilterns not once but twice and  many hours would be spent riding in the dark so I would need a bigger saddle bag to carry a jacket and a better rear light, while I sorted the bag out I sent Geoff out on the hunt for the rear light

So the alarm was set for 5 am on Saturday 17th November and armed with our egg sandwiches for breakfast we met Nigel and Yasmin at the train station for the 6.24 train to Stevenage. 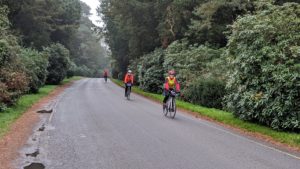 After collecting our receipt in Stevenage we were on our way just after 7 am, the outward ride to Oxford was lovely with perfect weather for the time of year. I especially enjoyed riding through Woburn and seeing all the beautiful autumn colors, we arrived at Iffley Stadium in time for Lunch, the choice of food at the cafe was disappointing but the stadium and Roger Banister memorabilia made up for the lack of choice.  The runner in me was drawn to the running track, shame I didn’t have my running shoes but I did have a little jog !!

An hour later and we were on our way again, deciding to take a detour down Oxford high street before heading back to Stevenage via Chesham and Welwyn Garden City. Having never been to Oxford it was a very impressive High Street.

The aim was to get over the Phoenix Cycle trail near Thame before dark, as the rumor was it had some bad road surface in places. I was very happy we got over it before dark as the surface in place was horrendous with cracks so big you could have 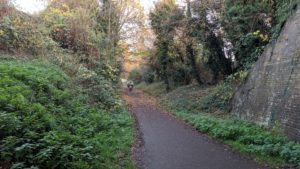 easily disappeared down one if not seen.

Onward we traveled up and down, then along another cycle track that ended with a steep slippery narrow exit, Nigel made it out but the rest of us got off and walked and that is when Geoff discovered a Puncture, by now it was quite dark, which made changing a puncture very interesting, Geoff opted to change the tyre so didn’t have to look for the offending flint/thorn, after a good 30 mins the puncture was mended, with a helping hand from Nigel who had returned after noticing we were missing.

We were happy to be on our way again heading towards Chesham, and a much enjoyed Costa coffee. then it was more climbing and more downhills, along narrow twisting lanes, which made for challenging riding in the dark, a tip from Nigel was to keep my Garmin on the elevation screen so I could see what was coming. By the time we reached Welwyn Garden City my arms were aching from gripping onto my handlebars so much. 21km left to go back to Stevenage train station, better roads made for easier night riding and we rolled into the station and collected our last receipt with 30 mins to spare.

Not the best route for night riding and maybe better the opposite way round but then we would have missed the beautiful scenery around Woburn, but definitely a great calendar event to do.

All in all a great adventure with good company and it certainly has not put me off night riding.

( Thanks to Nigel for the Photos )