In August while Geoff was still away in Russia I suddenly thought the time is slipping away and I still have 2 rides on my Audax list that needed doing before the end of the Audax year in October.

I had the Mildenhall Roving 300 in mind as it was close to home, started at 5 am, which I thought would be better than a nighttime start and it was flat. As it seemed we were unlikely to get to Derbyshire for our hilly Audax I was Drawn to the Welland Wonder 160, again close to home starting from Husbands Bosworth.

So on Friday  24th August, we booked ourselves into the Barton Mills Travel Lodge, 4 miles from West Row Village Hall and the start of the Mildenhall Roving 300 Audax. We set our Alarm for 3.30am and decided to ride the 4 miles to the start. Apart from one test ride, this was my first experience of riding in the dark.

After collecting our brevet card, enjoying a cup of tea and a chat with the other 27 riders it was out into the cold and dark at 5 am to begin our journey. 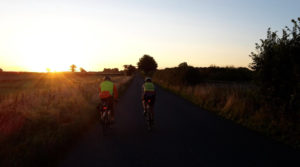 The First stop was at Wally’s cafe for Breakfast an amazing 68k watching the sunrise.

After a very welcome hot drink and a bacon sandwich, we left Wallys with Alex, Richard, and Rikki and stayed with them till Halesworth at 157k, around the halfway point.

This is where Geoff made a big mistake and had a huge dinner of fish and chips along with 2 bottles of milkshake.

We spent the next few miles or so riding on our own till we caught Alex up who unfortunately had a mechanical and a broken chain, we stopped to help but even Geoff with his magic bag of spares did not have the link needed to mend the chain. very sadly we had to leave Alex to make his way back to the train station while we continued on our way.

At 197k we rode into Diss on our own, found a Costa coffee and enjoyed a nice slice of cake, which perked Geoff up nicely, then just as we were about to leave Richard and Ricci rode passed and the 4 of us continued on our way to Wymondham. 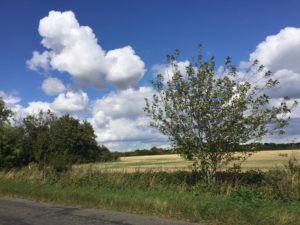 At Wymondham and 221k, my friend Jayne came to see us at the market square while we re-fueled and found the answer to the question, when was the Great fire we then set off on our way to Swaffham and home territory, by the time we reached Swaffham it was dark and with only 50k to go I started to get a real buzz as I realized we were almost finished.

After stopping at the shop, for our receipt and more refueling, the guy inside also insisted Geoff had a red bull, for an extra burst of energy, 5 of us set off in the dark towards Mildenhall.

The next 50k was some of the most awesome miles I have ever ridden, along a quiet country road, where you could hear every animal and bird sound possible, having a full moon to guide us also helped, at one point an owl appeared and flew along the road above Richard which was just an amazing sight. Then at around 10.15pm, we rode back into West row Village Hall and My First 300k ride was done !!!!

We rode back to the travel Lodge making it a 196-mile round trip, after the obligatory  Audax Macdonalds, we packed the bikes into the car and drove back to Cambridge, with me wondering if I could do a 600k !!!!!!

( Thank you to Alex for the Photo )