July 2015 was the first time I tried to ride my bike in Derbyshire, a 50 mile route from Buxton that totally destroyed me, mentally and physically and I vowed I would never go again. 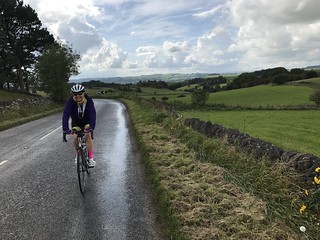 After that,  I have avoided hills as much as possible because just the thought of them made me panic and break into a sweat.

Then I changed my bike, started getting stronger,doing longer rides including three, 200km Audaxes and The lap of Anglia, so when Geoff suggested an Audax in Derbyshire, after my initial panic I thought I have to do this because Geoff has accompanied me on the long Audaxes its only fair I accompany him on a hilly one.

So yesterday I found myself in Alfreton for the Hilly Beware of the Plague Audax around the Peak District. I wore my SWNC kit and It attracted many funny looks, many of the other riders wondering if I knew what a hill was !!!

I was told get to Eyam tea rooms and all the hills would be done, so off we set and I actually found myself enjoying the lovely scenery, amazing views, and the climbs, it felt like in no time at all we arrived at the first control point at Eyam T-rooms.Some of the other riders teased me saying you made it then !! Then proceeded to tell me that I had not seen a hill yet !!! 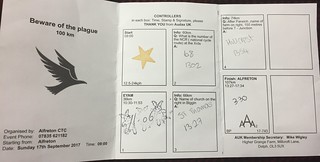 We left the tea rooms with me wondering what was to come, but happily, I can say it was just more great scenery fabulous views and enjoyable riding, In fact, we were enjoying ourselves so much we forgot to stop at Monsal Head and get a photo of the viaduct !!  luckily we seemed to miss all the heavy showers just catching a little drizzle now and again.

As we headed back to Alfreton we passed the Crich Stand, Geoff suggested we go take a look but as it was at the top of a long hill I declined. We arrived back in Alfreton at 3.30 just as the heavens opened and I can honestly say it was a very enjoyable Audax.

Sadly this will most likely be the last Audax I get to do this year as Geoff will be going off on his travels again soon but I am sure next year we shall be doing more of the hilly Audaxes.

1 thought on “My first but not last Hilly Audax”