I had been looking forward to the first weekend in July for many months.

While away walking in Portugal we had booked up the Norwich Cycle swarm with Gina, deciding on the 100-mile route, an event I had wanted to do for a few years but had never managed to fit in !!

The route would cover some roads that we had never ridden on before so I was looking forward to some new scenery and a chatty ride with Gina.

Then SWNC decided that our yearly trip to Rutland to ride the hills would be on the Saturday before the Swarm, this we could not miss!

I had done this ride in 2014 but then missed out last year when I suddenly got afraid of hills !! Now I feel stronger on my bike I was eager to go and face my fear of hills!!

The route included 2 great stops, tea and cake at The Windmill then lunch at cafe Ventoux. 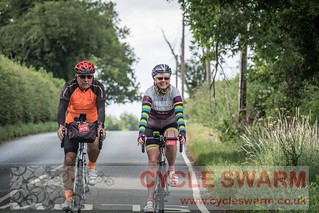 Happy to say I loved this ride, coping far better with the Rutland hills than I expected too, it was a huge SWNC turn out for an away day ride which just proves what a great social biking group it is.

Amazingly the Flying Scotsman even made an appearance just us !!

The Norwich Cycle Swarm is an annual mass participation cycling event that starts from Norwich City Football Club.The routes head out of Norwich through Wroxham then along the coast through Happisburgh and Bacton then turning inland at Mundesley, the coast road was very scenic and windy !!

It was all I expected it to be although I thought the feed stations were very poor but as we are used to doing Audax rides we just stopped at a cafe along the coast.

Although Gina had decided not to join us on the ride we did meet up for dinner so a perfect ending to a busy weekend.

1 thought on “Some Hills and A Swarm”